Requiem for the Rambler

The Arrowhead 135 is supposed to be difficult. This year was only my third attempt and it was the most difficult of all, for many reasons. I'll spoil the story by saying up front that I did not finish the full course. However, that matters little to me now.

Going into a winter ultra the words "polar vortex" will get your attention. Driving to International Falls, the temperatures reached that magic point where the 2 scales cross at -40. It is a magic number we use in the auto industry as an extreme lower limit of vehicle and component testing. This was the weather our little winter ultra family was going to spend a couple days in, wandering about the northern Minnesota wilderness. I was concerned but also looked forward to solving the puzzle that the elements can be.

It turned out that I didn't figure it out. From the first mile I started sweating. I opened up coats to try to cool off. I even stopped to remove a layer. I tried slowing down, especially on hills. No matter what I did I just kept getting wet, which just leads to issues.

Arriving at the first checkpoint later than I really wanted to was frustrating but I was still in good shape to finish. My feet were in excellent condition, so at least I seemed to figure out that mystery for the time being. I ate some food, took care of my feet and tried drying my wet clothes. All this took me far too long as I saw many other runners dealing with the same issues, some of those dropping from the race here. I got my gear together and set out into the night, knowing that getting to the halfway point would be the key to finishing. Once there, I felt I could power through to the finish like I had done on the previous attempts.

The night was noticeably colder but my sweating issue was not improving. Now the problem of staying awake was creeping in. There were brief periods of feeling I had found the optimal temperature, where I could move along at a good pace without large swings in body temperature. These were short and rare though and I as I finally reached the crossing at Sheep Ranch Road (used as a base for the snowmobile crew checking on our safety), the periods of being cold were becoming longer and colder. I thought about stopping here but told myself that I should get to the next checkpoint and sleep before deciding to quit. Often things turn around radically with even the shortest nap. So I put my head down and moved down the trail

Within a quarter mile I was regretting my decision. The thought of turning around and returning to the road to quit became relentless. With each step I was getting further away and more committed to getting to the next checkpoint. As I kept moving I started to pass runner coming back from the other direction. They had made the decision I still couldn't make and this was making it even more difficult. But I kept going.

Finally, after what must have been two hours of staggering from sleepiness, I heard the sound of a snowmobile approaching from behind me. I was getting cold and had begun scanning the sides of the trail for a place to bivy for a bit. When he pulled up next to me it was very easy to tell him that I was done. My desperation to finish had led me to accept a 14 mile snowmobile ride at -30 degrees. It was long and miserable. This will be remembered vividly the next time I want to quit a winter ultra.

Another DNF for me. This one didn't matter. I could have gone further. I may even have been able to finish somehow but I didn't. The decision was the right one as far as safety is concerned.


Now the part I never wanted to get to.

My first memory of Randy was at the pre-race meeting for my first attempt at Tuscobia in 2016. His appearance alone made me think this was an interesting person. It wasn't until the next year I began to get to know him over the weeks that 6 of us finished the Order of the Hrimthurs on foot. All of us formed a bond over those weeks. It is not often you get to share an experience like that with someone. We shared the suffering and the joy that comes from accomplishing something difficult. I am thankful that as the 6 of us all sat together in a tiny room after finishing, that I was mindful that it was a special moment. We had completed this difficult task together and were spending this brief time in the joyful afterglow.

During the last race of that series, at Actif Epica, my GPS unit failed early in the race, leaving me with no way to finish. Randy, who was near by just handed me his and stated he didn't know how to use it and we could just stick together. We stuck together for the better part of the race. Through the rural Manitoba night we talked about music, politics (Randy's favorite), races we had run, our families. The story he told me of his life had both of us in tears as we trudged alone through the dark.

Years earlier Randy had tragically lost a young child and then his wife. He could have been forgiven for becoming a bitter, angry person but he was the exact opposite. He was silly. He was funny. He brought joy to those around him. This made it all the more painful when we were told the news last October. Just a month after finishing the Tahoe 200 mile race, he was diagnosed with a rare form of leukemia that was basically incurable.

The message that he was stopping treatment and going home reached me on my drive up to this year's Arrowhead. I ran the race with a very heavy heart though it led me to realize something I already knew was true. No one talking about Randy cared about if he had finished races or not. His finish times didn't matter. The joy he brought to others is what we remember. That is what any of us will be known for in the end.

At some time while many of us were struggling and quitting our race, Randy left us. He spent his last days surrounded by family and friends. In ancient Greece, Solon the Athenian told King Croesus to consider no man happy until his death. I hope that the outpouring of love for Randy gave him that happiness and showed him the positive impact he had on all of our lives.

Somewhere in that cold night near Winnipeg, Randy talked about a writing class he was taking. He told me how he had been assigned to write a short story but it couldn't be about yourself. Randy wanted to write about his story and asked what I thought he should do. I told him that is was his story, his art and to just write whatever he wanted. If he felt he needed to share it, then share it regardless of the assignment and we left it there. Since then I have wondered if he ever wrote that story and what it said. In the days since his passing I have realized he wrote a story for each of us that knew him. I'll always cherish the story he gave me. I loved the man. I miss my friend. 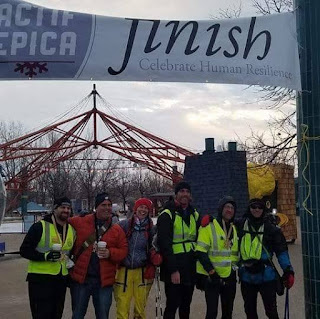